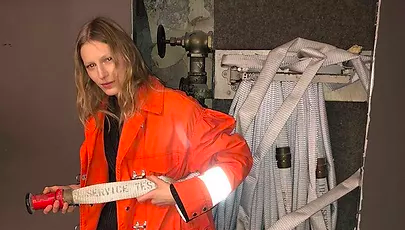 In video and photographic work, as well as the installations conceived to sculpt them, Milena Langer’s use of technology is a primary one. Rejecting the conception of the digital as merely the screen-as-skin or platform-as-possibility she ignores the narrative of the digital native. Finding her own avenues of ghosts in shells and taming them for the personal that lusters towards the planetary. This intimacy, obscured by the display as well as within, is one that orbits passions enslaved, as shackles of desire are vessels of pleasure. Edging the moment of climax to exist hereafter eternally. The desire sometimes unknown to the viewer or impossible to unearth as it shifts around throughout her practice. The camera and display in Langer’s work are tools of action in their own right. As with a bodycam: what is seen is seen by the device, suggestion of the corporal is one of inference. She mobilizes efforts and operations themselves instead of cinematic views onto them. This rejection of the camera as voyeur empowers specific moments in a captured presence instead of an eternal capturing. All echoed in her constructed installations where the importance of the screen as object dwarfs its omni-importance as one of two-dimensional, time-based display. At Plymouth Rock we are confronted by three silent and monolithic clones, videos we search out in space and try to decipher their camouflaged secret. The work of Langer is one that revels in the hidden and the aesthetics of showing and hiding and seeing in the public realm. Minimal and stark she transforms the space into a concept boutique or autocratic security center. Exposing the perigrees where the aesthetics of art, fashion and surveillance eclipse one another as distant moons.