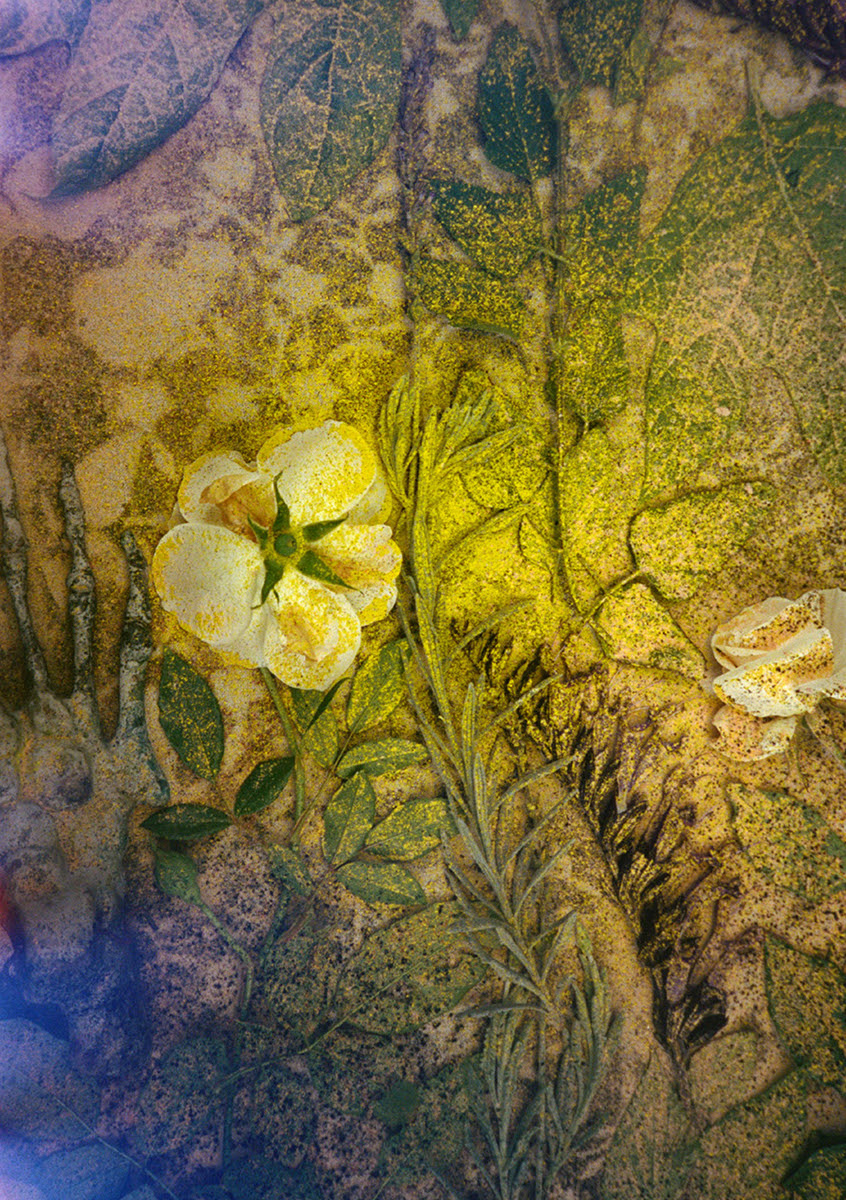 I have been thinking about Sam Falls’ art ever since I saw his exhibition at Ballroom Marfa in August 2015. I sat cross-legged on the wood plank floor right in front of the works hanging on the walls. I had them to myself; I had all the time in the world.

He made some of them by leaving fabric to weather in a field outside of town, covering dyed linen with galvanized iron cattle fencing. When he returned months later, grass and weeds had woven their way into the linen, and it was stained by the earth. The Texas sun had faded the exposed surfaces, creating a negative image of the cattle fencing, ghosts. It was as if Falls had infused Agnes Martin’s minimalist grids with the existential force of nature.

Five years later, his newest pieces on cloth and in clay have a concentration of purpose previously dispersed over a range of practices. One of them haunts me, Super Bloom, Ancient Earth (Mojave Desert). A new type of direct photograph, it is dust in the wind, a skeleton lying in a field of poppies, a canvas covered in powdered pigment, veils of black, red, green, and yellow sprinkled from above, soaked in by rain. Flowers removed, bones gone. A gorgeous haze of life and death.

The associations we draw come from however we negotiate beauty and polysemy. I find a middle-aged man’s touchstones: John McCrae’s war poem “In Flanders Fields,” Jackson Pollock’s action painting Blue Poles, and Jeff VanderMeer’s novel, Annihilation, which describes plant and human life synthesizing into one. I forge my own world, but I am grateful that Falls’ art draws me into his.

Falls made this body of work during the Covid-19 pandemic, a black angel of death upon us. The Plague, Spanish Flu, HIV/AIDS, we have been here before. He found comfort in Renaissance masters, in Botticelli, in Veronese, in how they balanced the limits of the mortal world with the promise of eternity. The twist of St. Lucy’s dying body, dagger at breast, provided part of the formal authority for two pieces, a leaf from a philodendron placed here, layers of color there. By bringing devotional iconography into his en plein air practice, he asks viewers to contemplate parallels between figures and ferns, between his actions and the environment, between heaven and the leaves of grass. The pieces are not translations. They merge bodies and nature to present beginnings and ends as one.

I keep watching a short video he produced this past September. It is partly a studio visit, where he explains his art. But the words, “father,” “mother,” “sister,” “brother,” and “nature,” keep reappearing. He shares footage and photographs of his young children playing in his backyard, and the woods in New York, and the canyons around Los Angeles. Household scenes flash by too quickly. There goes the dog. The family travels to the California desert during the super bloom, where he makes art alone as the world goes wrong. The camper van gets stuck in the mud. His older son bounces down a gravel road, humming a Warren Zevon song, “Desperados Under The Eaves.” His wife, Erin, sits in a field, snuggling their younger son, their flesh shrouded in poppies. Like the Marfa elegies before them, Falls’ newest art washes away the hands of man, leaving only earth and sky.